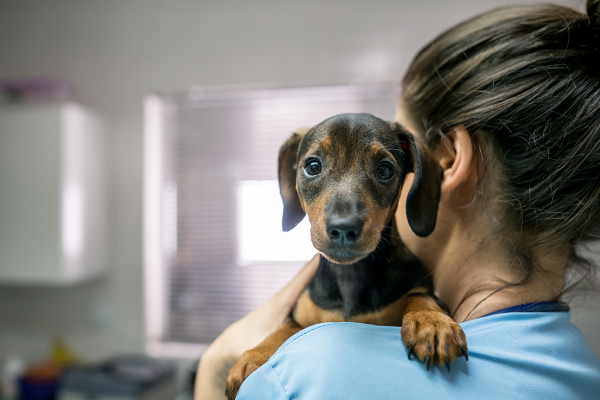 What are lysosomal storage diseases?

Lysosomal storage diseases are a group of disorders in which certain metabolic enzymes necessary for normal body functions are not produced by the body. Lysosomes are “recycling centers” in the cells and they process the worn-out materials in the cell back into substances that the cells can use. If the enzymes that are needed to metabolize specific substances in the cells are absent, accumulation of the unprocessed material causes tissue damage and organ system failure.

Lysosomal storage diseases are rare and are inherited through recessive genes, meaning both parents are carriers. Responsible breeders remove these dogs from their breeding programs.

What are the clinical signs of lysosomal storage diseases?

The clinical signs of lysosomal storage diseases vary depending on the enzyme that is missing, the cells involved, and the material that is accumulating. In general, the most common symptoms seen in puppies with lysosomal storage diseases include failure to thrive, incoordination and balance issues, exercise intolerance, abnormal vision or progression to blindness, fainting, and seizures.

"The clinical signs of lysosomal storage diseases vary depending on the enzyme that is missing, the cells involved, and the material that is accumulating."

What are some examples of lysosomal storage diseases in dogs?

There are several formally described lysosomal storage diseases that affect dogs. Each has its own effects on the body, and each has certain breeds in which it tends to be found. These include:

Ceroid lipofuscinosis
Dogs with ceroid lipofuscinosis lack the enzyme that breaks down a type of fat that otherwise accumulates in nerve cells and in the liver, kidneys, and spleen. Associated signs include decreased vision, head tilt, dilated pupils, lameness, dementia, seizures, and balance problems. Breeds most often affected include the Border Collie, Chihuahua, Cocker Spaniel, Dachshund, English Setter, Golden Retriever, and Saluki. Prognosis is poor, and many dogs are euthanized shortly after diagnosis.

Gangliosidosis
Dogs affected by gangliosidosis lack the enzyme that breaks down a molecule on the surface of the brain and neural cells. Clinical signs include decreased vision, nystagmus (twitching of the eyes), lethargy, weakness, dementia, tremors, incoordination, seizures, and a stiff gait. Breeds most often affected include the Beagle, English Springer Spaniel, German Shorthaired Pointer, Japanese Chin, Portuguese Water Dog, Shiba Inu, Siberian Husky, and Toy Poodle. Prognosis is very poor, and most dogs are euthanized before one year of age.

"The disorders manifest shortly after birth, progress rapidly, and the affected dogs typically die between four and six months of age."

Globoid cell leukodystrophy (GCL)
This condition is also known as Krabbe's disease and affected dogs lack an enzyme that breaks down a fat that influences nerve impulse transmission. Associated symptoms include decreased vision, tremors, incoordination, seizures, muscle atrophy, deafness, and partial paralysis. Breeds most often affected include the West Highland White Terrier, Cairn Terrier, and Irish Setters. Prognosis is very poor, and most dogs are euthanized before one year of age.

Mucopolysaccharidosis
Dogs affected by mucopolysaccharidosis lack the enzyme that breaks down one of the building blocks of cartilage, bone, tendons, skin, connective tissues, and the corneas. Clinical signs include weakness that starts in the rear legs and progresses to all four limbs, muscle-bone disproportion, and clouded corneas. Commonly affected breeds include the Rottweiler, Boston Terrier, Retrievers (Chesapeake Bay, Labrador, and Golden), German Shepherd, Miniature Pinscher, and Plott Hound. Prognosis is poor, and many dogs don't make it to adulthood.

Pyruvate kinase deficiency
Dogs with Pyruvate kinase deficiency lack the enzyme that involves the metabolism of red blood cells. Clinical signs include anemia, weakness, muscle wasting, jaundice (yellowish mucous membranes), and elevated heart rate. Commonly affected breeds include the Basenji, Beagle, Cairn Terrier, Dachshund, Pug, and West Highland White Terrier. Prognosis is guarded and seems to vary depending on the breed. Some dogs will live for a few years before succumbing to disease.

Is there any treatment for lysosomal storage diseases?

Unfortunately, lysosomal storage diseases are uniformly fatal. The disorders manifest shortly after birth, progress rapidly, and the affected dogs typically die between four and six months of age. The missing enzymes are involved in basic metabolic functions, and without them, the body simply cannot function and thrive. These are a devastating group of diseases, and it is fortunate that they are quite rare.

© Copyright 2022 LifeLearn Inc. Used and/or modified with permission under license.